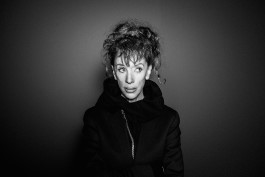 Sibylle Berg is the most widely recognized contemporary female writer in the German-speaking world, and has been called one of Germany‘s most provocative writers. Her first novel Ein Paar Leute suchen das Glück und lachen sich tot (A Few People Search For Happiness And Laugh Themselves To Death) was published in 1997 by Reclam to great acclaim, with one critic dubbing her “the new voice of a young, disenchanted generation“. It was later translated into ten languages and has entered the German school syllabus.
Her writing has been compared to that of Kurt Vonnegut, Brett Easton Ellis, Michel Houellebecq, and Will Self. She has become an iconic figure for Germany‘s alternative subcultures, and has gathered a huge following in Europe‘s LGBTQ and art communities. She has written 13 novels to date and is currently researching for her next book to be published by Kiepenheuer & Witsch in 2018.
Her novels and journalistic works have been translated into 34 languages and her Spiegel Online column Fragen Sie Frau Sibylle (since 2011) has more than 4 million followers.

Sibylle has written 23 plays including recent hit shows And Now The World (Gorki Theatre, 2014) and And Then Came Mirna (Gorki Teatre, 2016) and Nach Uns Das All ( Gorki Theatre 2018). All three plays, which now form the first three episodes in her GIRLS SAGA, have been directed by Sebastian Nübling and are playing to sell out houses since their offical openings in various productions throughout the world.  They have won several important theatre awards including Theater Heute’s Play Of The Year Award, Friedrich Luft Preis and the Audience Award at Muehlheimer Theatertage.
Her latest play Wonderland Avenue was commissioned by Frieze Projects for Frieze Arts Fair 2016 where it was presented, again directed by Sebastian Nuebling, in a set built by German artist Claus Richter. The play is having its German premiere on 8th June 2018 at Schauspiel Cologne directed by rising star Ersan Mondtag

Sibylle has been awarded with the Else-Lasker-Schüler-Dramatikerpreis, one of Germany’s most prestigious Theatre Awards. Since 2016 she is a regular contributor on Schulz and Böhmermann on German network TV ZDF.

The New Voice of  A Young Generation!

This is fresh immediate powerful theatre that had a packed house at Hackney Showrooms utterly engaged and absorbed.  - londontheatreone.com on AND NOW: THE WORLD!

Berg settles her account with a world in which Hollywood movies are seen as depicting the ideal lovelife, friends are social contacts, and shopping is a civic duty. What a wonderful piece of theatre – powerful, brutal and desperate - Süddeutschen Zeitung  on AND NOW: THE WORLD!

A masterpiece of brilliantly considered excursions, filled with glittering aphorisms. - Der Spiegel on THANK YOU FOR THIS LIFE

Sibylle Berg sifts the good from the bad, with capitalism on the brink of judgment day. This is not a novel, it‘s a manifesto. Die Welt on THANK YOU FOR THIS LIFE

Musicals & Plays:
DOG, WOMAN, MAN
THE LIFE OF VICTOR
AND NOW: THE WORLD!
AND THEN THERE WAS MIRNA
EAT WELL AND EAT LOTS
WONDERLAND AVENUE