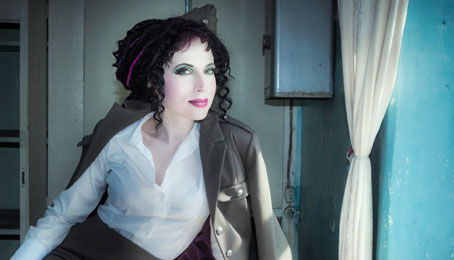 Finnish-Estonian writer Sofi Oksanen (born 1977, Jyväskylä, Finland) was catapulted into the elite of young Finnish literary authors with her first novel “Stalin’s Cows” in 2003. Her original and political début, at once revolting and sublimely poetical, created a heated public debate and gained her a nomination for The Runeberg Award, one of Finland’s most prestigious literary prizes. Oksanen followed up the success with the publication of a second novel, Baby Jane, in 2005.

Oksanen’s first original play “Purge” was staged at the Finnish National Theater in 2007 to rave reviews. The characters she had created would not leave their author alone however, and out of the play grew Oksanen’s third novel “Purge” in 2008. Puhdistus became a runaway success, and Sofi Oksanen’s major breakthrough: a No. 1 bestseller in Finland with sales exceeding 260 000 copies, it has won numerous literary prizes, including Finland’s premier literary award, The Finlandia Award, and biggest literary award in Nordic countries, Nordic Council Literature Prize 2010. Oksanen is the youngest author ever to win either one of these prestigious prizes.

Purge, which was translated into 38 languages has also won the 2010 FNAC prize in France. It was selected from 300 works published in France. This is the first time the award has gone to a foreign author.

“Purge” enjoyed a critically-acclaimed production at the Arcola theatre in 2012 and has had more than 25 productions including New York and Washington DC. It was also adapted as an Opera and as feature film

Her latest play “When The Doves Disappear”, adapted from her novel of the same name, premiered in Helsinki in November 2013.