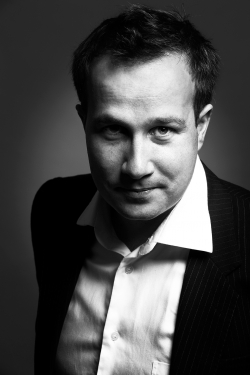 Andri Snær Magnason is an Icelandic writer, born in Reykjavik on the 14th of July 1973 and studied Icelandic Literature in the University of Iceland. He has won the Icelandic Literary Award in all three categories - Fiction, Non Fiction and YA/Children's literature.

Andri has written novels, poetry, plays, short stories, essays and CD’s. His work has been published or performed in more than 30 countries. His book Bonus Poetry is one of the most sold books of poetry in Iceland, published by Bonus Supermarkets. His novel, LoveStar won the Philip K Dick Special Citation 2013, was chosen “Novel of the year” by Icelandic booksellers and received the DV Literary Award. Publishers weekly said about LoveStar: "Orwell, Vonnegut, and Douglas Adams are felt on every page, though Magnason is never derivative. His satire and insightful social commentary sweeten the pot and the sheer wackiness of Magnason’s oversized imagination is invigorating."

His plays have been performed on large stages in Toronto, Wasa, Lahti, Lucerne, Berlin, Gdansk, Reykjavík and soon in Arhus.

Andri has been active in the fight against the destruction of the Icelandic Highlands. His book – Dreamland – a Self Help Manual for a Frightened Nation takes on these issues. Footage from Dreamland and an interview with Andri can be seen in Charles Ferguson’s Oscar winning documentary – Inside Job. Andri Magnason is the winner of the Kairos Award of 2010 – granted by the Alfred Toepfer Institute in Hamburg.

His most recent book from 2013, Tímakistan -  The Cascet of Time won the Icelandic Literary Award and is nominated for the West Nordic Children's book Award. It is currently being adapted for the stage for production in Iceland later this year.

Andri lives in Reykjavík with his wife four children.