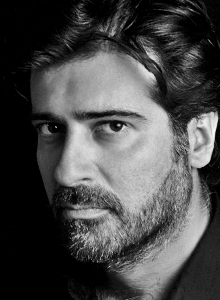 Rafael Spregelburd, born in 1970 in Buenos Aires, dramatist, director, translator and one of the most important representatives of contemporary Argentine theatre. He studied art, acting and dramaturgy at the University of Buenos Aires and with directors Ricardo Bartis and Mauricio Kartun. Still acting on the stage, his career also includes many major TV and Film successes making him one of the most famous actors in the country.

Rafael is a prominent and influential playwright of the post military dictatorship generation amassing over 50 awards for his writing in Argentina and internationally, most recently the 2011 Argentinean National Prize for ‘Stubborness’, the Tirso de Molina Award in Spain for “Stupidity”, the Cuban Casa de las Américas Prize for “Paranoia”, the Italian Ubu Award for “Lucid”, “Bizarra” and “Panic”, among others.

A regular on the international festival scene with his own theatre company ‘El Patrón Vázquez’, Rafael gradually conquered all of Europe – to name but a few: he was a grants holder at the Theatre Beckett in Barcelona, the Deutsches Schauspielhaus in Hamburg and the Akademie Solitude in Stuttgart, a guest writer at the Schaubühne, Berlin and at the “Frankfurter Positionen” in Frankfurt and Mannheim, part of the Royal Court International Playwright Residency and his play ‘Stupidity’ formed part of the National Theatre Studio Season. Currently his plays are being produced to great success in Germany, Italy, Switzerland, Portugal, Spain and France. In 2012 he was Artistic Director of ‘Ecole des Maitres’, a theatre academy run in Italian, French, Portuguese and Belgian cooperation.

‘Call Me God’, a joint work with Marius von Mayenburg, Albert Ostermaier and Gian Maria Cervo will premiered in Rome and Munich two years ago and has been running with great success ever since.