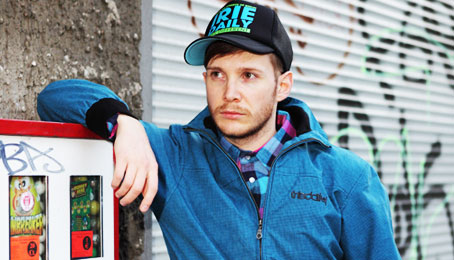 Nis Momme Stockmann was born in 1981 on Föhr and writes plays, radio plays, lyric and prose. He studied Tibetan language and culture in Hamburg, and media studies in Odense, Denmark, then trained as a cook before studying creative writing for the stage at the University of the Arts in Berlin.
In 2005, he won first prize at the Odense International Film Festival for his short film Ignorans.
He was awarded the Authors' Award and the Audience Award at the 2009 Heidelberg Stückemarkt for his play The Man Who Ate the World.
He was commissioned to write a play for the 2009 Berlin Stückemarkt and wrote No Ship Will Come for the Staatstheater Stuttgart's 2009/2010 season. In 2010, the play was presented as part of the accompanying programme at the Berlin Theatertreffen, as well as being invited to the Mülheim Theatertage and broadcast as a radio play by Radio Bremen.

Nis-Momme Stockmann has been writer-in-residence at Schauspiel Frankfurt. The first play out of this collaboration was THE BLUE BLUE SEA followed by THE FEARFUL AND THE BRUTAL ONES and finally THE FRIEND ILL. He developed EXPEDITION AND PSYCHIATRY for Theater Heidelberg in 2011.

In 2013 his latest work DEATH AND REBIRTH OF MY PARENTS WORLD WITHIN ME was nominated for the Mühlheimer Theatre Prize.

In the critics survey carried out by the theatre magazine Theater Heute, Nis-Momme Stockmann was chosen as the best young dramatist of 2010.

Musicals & Plays:
THE MAN WHO ATE THE WORLD
THE BLUE BLUE SEA