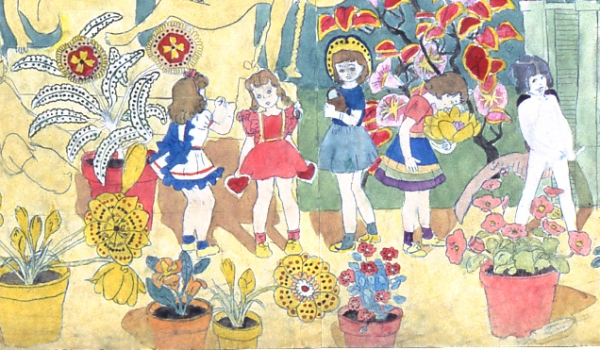 Most people wouldn’t have taken a second look at the hobo with a penchant for rifling through garbage cans, most people would’ve looked the other way. No one gave much thought to the unkempt man with the awkward gait and a church-going habit which saw him attend up to three times a day. The hobo’s name was Henry Darger, a lonely man who left behind a 15,000 page novel and thousands of his own paintings and sketches. Henry Darger is an enigma, a survivor of a childhood marred by violence and isolation and a man who found his purpose, and a place to belong, between the pages of his mythopoeia- The Realms of the Unreal, a fantasy work that became his safe haven.
He has inspired the likes of Grayson Perry and has been compared to Lewis Carroll, Andy Warhol, Balthus and Dr. Seuss. HENRY DARGER IS reads like a paean to art, In The Realms of the Unreal Darger made life bearable for himself, art is what saved him.
The play by Judith Kampfner, accomplished radio producer-writer, interweaves the imagined narratives of Darger’s exterior world with his interior one. Kampfner, using her research, has woven a beautifully lyrical play which looks at this fascinating man , and more universally, examines the way we all create our own stories to shield ourselves from what is often the frightening world outside. The lines between reality and his story are blurred as we are plunged deeper into the murky waters of  Darger’s own fiction The Realms of the Unreal.
The violence Darger had been exposed to in his life is found translated into the violence expressed in his written world. Soon these two worlds collide with the unlikely introduction of Elsie, a poor immigrant girl who went missing in 1920 and was found murdered. Darger is distraught and does little to deflect attention away from himself as a suspect, such is his inability to understand how he is perceived by others, such is his lack of vanity. He incorporates Elsie into his magnum opus which is replete with female martyrs and here bestows upon her the role of martyr for the children. HENRY DARGER IS explores the inner fantasies of this reclusive artist and the underlying issues behind his controverial, dynamic and often disturbing paintings.
The play is not only about this profound and fascinating man, but about all outsiders and what it means to live on the periphery, to be unable to enter into a world that is not yours for the taking.

The play has the support and endorsement of Kiyoko Lerner, the Darger Estate holder.

I thought the magical world of his mind you created was specifically striking.
– Erin Daly, General Manager of The Flea Theatre Company

The projected reality of Darger was very good. He carried the Blakean visionary role very well, put me in mind of the great illustrators too.
– Lucas Hunt Literary agent.

I thought you were able to convey the richness of Darger’s imagination so well
– Sandy Sawotka, Head of Publicity at Brooklyn Academy of Music BAM

Judith Kampfner’s work in progress is a trip down a theatrical rabbit hole. Its deftly zigzagging script makes the life of this fascinating outsider artist from Chicago even more enchanting, tragic and intriguingly strange.
– Tony Macaluso, Director of Syndication the WFMT Radio Network

In May 2015, Henry Darger’s art entered the mainstream, as fifty paintings
went on view in the Museum of Modern Art of the City of Paris. They will
be in the permanent collection hanging next to Picasso and Matisse. In the
gift shop at the opening, a line of people with student cards bought the
hefty catalogue, some of them with Vivian Girl tattoos. The director of the
museum said Henry Darger was one of the greatest artists of the twentieth
century. His works have been sold for three quarters of a million dollars.
How did a man with a menial job, who seemed uneducated, create a
series of expansive landscapes that were also highly detailed narrative
pictures and a 15,000 page novel? There is so much written about Henry
Darger but there is a still a huge ache in all of us who are fascinated by
him, an ache to understand when we have so little real information, so few
photographs and such a scarcity of personal anecdotes, because he was so
reclusive. We can only imagine and that’s part of his appeal and the
essential mystery. The Strange Case of Henry Darger is a reimagining of
how Darger’s outer world radically differed from his inner world and yet
increasingly impacted it. It’s an attempt to experience with him, how his
work took off and developed and how it nourished and essentially saved
him. He was an outsider and a misfit but in his Realms of the Unreal, he
ruled supreme. It is for me, a transatlantic play. Darger’s world and
especially his language, was influenced by nineteenth century British
novels and classic adventure stories, while his outer world was rooted in
the gentrifying Lincoln park neighborhood of Chicago.