The Demolition of the Eiffel Tower 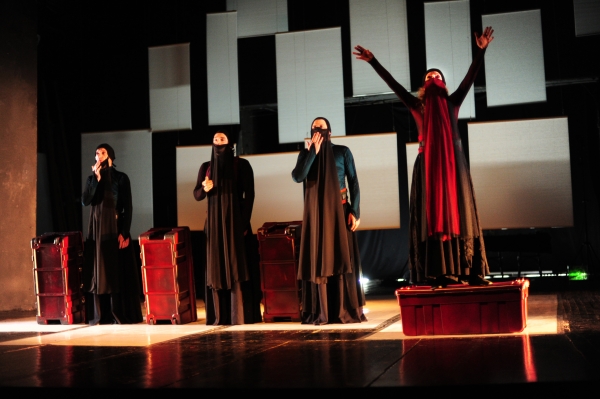 The tragicomedy, The Demolition of the Eiffel Tower, addresses one of the modern world’s most significant problems– terrorism arising as a consequence of global political and religious conflicts. In this play, Neziraj confronts cultural divisions, misunderstandings, religious fanaticism, violence, and issues regarding of democracy and individual freedom in Europe. Above all, the play highlights misunderstandings, stereotypes, and prejudices created as a consequence of the burka conflict in Paris. In a contemporary urban landscape, we follow the weird story of a European, who is kidnapped by two Islamic terrorists because he insists on removing burkas from the heads of Muslim women in Paris. Meanwhile, as if in a fairy tale from the past, in a parallel story, an Ottoman soldier is ordered by the Sultan to distribute burkas to recently- converted Balkan women. The Demolition of the Eiffel Tower is an alternative to the mainstream media’s fixation on the burka; the play opens discourse on the most substantive issue – to know and understand the drama of the other.

“This play, has a gruesome love story at its core and contains fairy tale-esque aspects. The political satire is juxtaposed with various poetic motifs. Jose is a descendant of Orpheus; he also loses his woman by looking at her. A ghostlike figure named “Young Osman” wanders through Aisha’s dreams – one of 19th century Ottoman sultan Abdul Hamid II’s soldiers, whose mission is to veil the women of Europe.
(Wolfgang Kralicek, theater critic, Vienna)

“The Demolition Of The Eiffel Tower… is an ambitious tragicomedy involving a fair amount of violence in its tale of a couple of not very competent suicide bombers staked out in Paris.”
(Ian Herbert / Theatre Record)

“Two parallel destinies for which the themes of physical love, nakedness and Moslem religion are entwined together. To all this, a humorous ingredient is added: the building and subsequent collapse of a miniature Eiffel Tower made of matchsticks, a symbolic representation of a projected terrorist attack. A joyous text in which are found burlesque scenes, such as the one in which the two terrorists shown as true jihadists buffoons interrupt a theatre performance, much more gruesome ones, such as an episode of torture in Pakistan, women's monologues about the wearing of the veil, as well as Osman's more courteous tale when he meets Maria and discovers love.”
(Gilles Boulan, Le Billet des Auteurs de Théâtre)