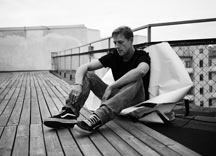 In 2006, Faldbakken published Kaldt produkt (“Cold Product”). It is a contemporary update of A Doll's House by Henrik Ibsen and was performed at the Staatstheater Stuttgart in 2008.

»Reading Faldbakken can be a good way of making order in your own processes of creating meaning.«
(Morgenbladet)

»UNFUN  is the strong finale of a trilogy that it will take a long time to fully grasp the complexity of.«
(NRK)